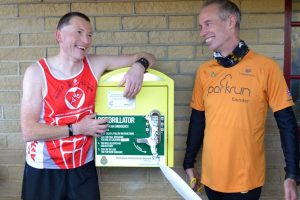 And the 48-year-old father of two could have been forgiven for being emotional when he joined 690 other runners at Greenhead Park in Huddersfield – for his 100th Parkrun.

Sean, of Brockholes, was about to start his seventh Parkrun in 2013 when he collapsed from a massive cardiac arrest which left him with only a 6% chance of survival.

Only the swift attention of medics – and the use of a new chest compression system – saved his life. 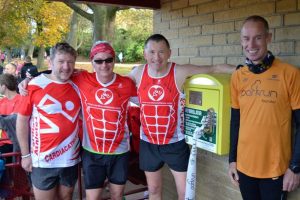 Three years on he is a regular at the weekly Saturday morning gatherings at Greenhead Park, one of the largest in the country.

Joining Sean at the milestone event was Parkrun founder Paul Sinton-Hewitt, who cut a ribbon to officially celebrate the purchase of an Automated External Defibrillator, a speclialist device that could save more lives.

Fundraising from the Parkrun community and Huddersfield Pennine Rotary Club means the machine will be made available to the public in a secure box.

Paul said he was delighted to share Sean’s big moment and added: “It’s not often you can stand with a man who came back from the dead and went on to make such a difference to a community.” 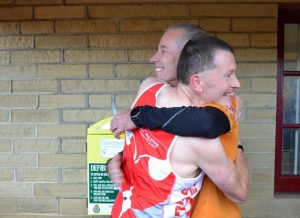 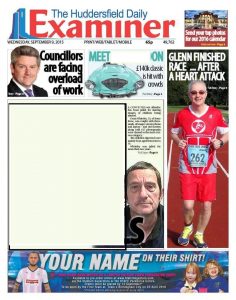 Dave Tuttle’s cardiac history was textbook. Years of smoking and sedentary ways had taken their toll. In his late 40s, he got out of breath — and had angina — walking up a hill. A quadruple heart bypass was his final wake-up call. 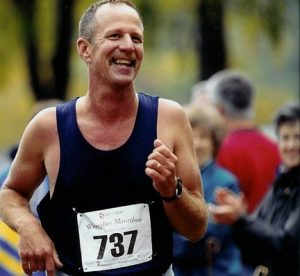 That was 11 years and thousands of miles ago. Determined to take control of his health and life, Tuttle took up running.

Today, at 57, he looks the part of the endurance runner he has become. Slender and fit, Tuttle has completed five marathons and runs as much as 50 miles a week, logging every single one along the way: 9,073-plus miles and counting. “I feel great. I had couple of cardiologists tell me it’s the only reason I’m alive,” he said.

Tuttle, who lives outside Buffalo, N.Y., has close running ties to Harrisburg. He is a member of Cardiac Athletes, who, as their name implies, have overcome cardiovascular episodes to become runners, swimmers and tri-athletes. The Harrisburg Marathon , with its central location, flat course and ideal November conditions, has become one of the group’s favorite venues.

This year, when Cardiac Athletes return to run the marathon in November, it will donate to the New Cumberland EMS an artificial exterior defibrillator — an AED — that it purchased through a fundraiser.

Tuttle said it’s a token of gratitude for all the work the EMS does each year during the race. “They have had such a great presence in that race,” said Tuttle, who ran the race in 2007. “I’ve been really impressed with what they do there, how many are out on the course and how proactive they are. They do a great job.”

The AED will help the unit provide critical care in emergency situations, especially along the marathon route, said Cindy Anderson, captain of the New Cumberland EMS. “We’re extremely grateful for that,” she said. “AEDs are one of the pieces of equipment that are usually at a premium at that type of event.”

A few years ago, the New Cumberland unit used an AED to resuscitate a runner who had collapsed near the finish line. “He is still alive and kicking today,” said Chad Krebs, race director for the Harrisburg Area YMCA.

The race, which grows annually, had its biggest turnout last year, with 900-plus individual runners and some 350 relay teams. Krebs hopes to hit 2,000 runners this year.

Anderson said she learned of Cardiac Athletes a few months ago when Tuttle called her to arrange the donation of the AED. “My first thought was, ‘Oh, God, just what I need out there on that day … two dozen confirmed cardiac patients,’ ” Anderson said. “But these aren’t the people I should worry about. These people know they have a problem. They are training correctly and being monitored by their doctor. It’s the other people who aren’t training correctly and don’t realize they have cardiac problems. They are the ones we should worry about.”

Running — even strenuous marathon training — is advisable for many heart patients, said Dr. Timothy Walsh, a cardiologist with the Moffitt Heart and Vascular Group in Wormleysburg. “The majority of heart patients that have had an event and have had appropriate treatment, a change of lifestyle and eating, and have gotten involved in exercise can take it to that level,” he said. “There may be a small percentage of heart patients who we do not want to see push themselves, but the majority of heart attack and post-attack patients, if they’ve made significant changes in their life, can get to that level.”

Walsh said he has several patients who have trained for ultra-marathons, which can entail 50 and even 100 miles of running during one event. “Most patients just don’t hear that message. The ones that do we are very happy about,” he said.

These days, once they give patients the green light, doctors like to see them out of bed within three days and in an exercise regime within the week. “We like to get them up doing things. We like to see them doing something five to six days a week,” Walsh said.